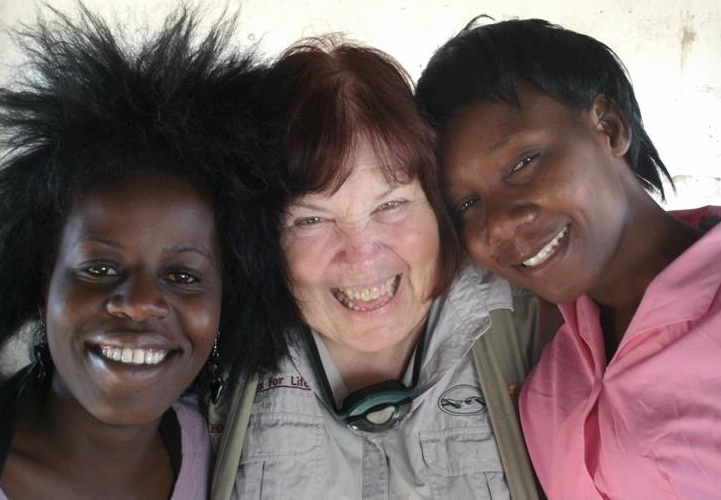 By guest blogger Jay Rogers — Dr. Patricia McEwen’s life legacy is profound. She was a sidewalk counselor, a pro-life missionary to many nations, an advocate for Christian refugees, the co-founder of Personhood Florida, and a tireless, sacrificial witness for the dignity of every human being, born and pre-born. Pat passed away after a decade-long cancer battle Thursday, September 12th in Africa, where her heart was.

And Jesus came and spake unto them, saying, All power is given unto me in heaven and in earth. Go ye therefore, and teach all nations, baptizing them in the name of the Father, and of the Son, and of the Holy Ghost: Teaching them to observe all things whatsoever I have commanded you: and, lo, I am with you always, even unto the end of the world. Amen.

Pat McEwen, missionary to the nations, died on Thursday, September 12th, 2019. “Miss Pat” had been a friend of mine since the fall of 1993. From 1993 to 2000, I lived in and owned a house across the street from the infamous Aware Women’s Center for Choice in Melbourne, Florida. Due to a restrictive “no-free-speech” buffer zone, the abortion center became a hot bed for pro-life activism. During that time, sidewalk evangelists and counselors cut the abortion rate in our county in half. This, while the abortion rate in every other county in Florida rose. The abortion center finally closed in 2000. The building was demolished and there is no abortion center in Brevard County today. 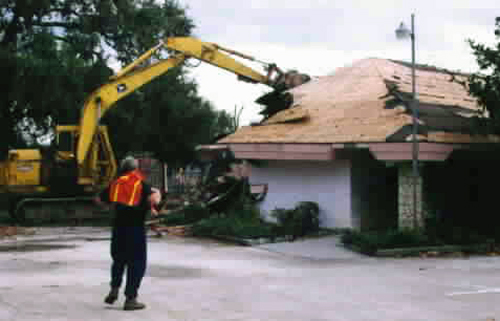 I first met Pat on the sidewalk in 1993, when she moved to Melbourne. Her reputation as an effective sidewalk counselor preceded her. Dr. Patricia McEwen was a retired university professor and horse enthusiast from upstate New York. She had sold her horse farm and moved to Florida to become a full-time pro-life evangelist. When I first saw her on the sidewalk next to the abortion center, I immediately introduced myself to her. I wanted to know how she was so effective in getting so many women to choose life. “I just do something crazy!” she said. Pat had a way of getting abortion-minded women’s attention. Then when they were engaged in conversation with her, more often than not they chose life for their babies. She was the most effective sidewalk counselor I have ever known and I have known some good ones. Not only did she rescue babies and train other counselors, but she also made sure the entire Melbourne pro-life street ministry was organized so that there were at least two counselors standing at the “gates of hell” every minute it was opened for business. After she arrived, the pro-life ministry began to function in a much more unified and organized manner.

I got started in full-time Christian work as a publisher, writer, video producer shortly after I spent a weekend in jail with Operation Rescue in Brookline, Massachusetts, on New Year’s Eve weekend of 1988/1989 as part of a peaceful prayer rescue. After that experience, I resolved that I’d stay involved in pro-life work, but as a writer. I did not envision myself ever being arrested again.

However, after I moved to central Florida in the 1990s, I was involved with Miss Pat in other arrests, which were dismissed in court, for challenging unconstitutional buffer zone laws. One of these cases, Madsen, made it all the way to the Supreme Court. Although we lost that aspect of the case, I was pleased to see our court testimonies quoted by none other than Justice Antonin Scalia in a scathing dissent. Because we continued to challenge the buffer zone injunction, we eventually encountered fair judges who realized that an injunction that we were not individually named in could not apply to us. Shortly after that, the city of Melbourne made the decision to stop arresting Christians for peacefully gathering on a public sidewalk. This story exemplifies the tireless attitude of service of Pat McEwen. She would not give up until righteous judgment prevailed.

Another arrest came from challenging yet another unconstitutional “no-free-speech” buffer zone in Winter Park, Florida. This case took a lot of twists and turns, but eventually it was thrown out because the city’s key witness, Jenna Tosh, CEO of Planned Parenthood of Greater Orlando, moved to California and would not return for the hearings. Whenever you did anything with Pat McEwen, you knew you were in for an adventure fraught with adversity, but that God would be victorious.

In 1993, the pro-life organization Operation Rescue was based in Melbourne, a small community on Florida’s “space coast.” The director at that time was Keith Tucci, who was also the pastor of Christian Life Family Church where Pat and I were members. Keith turned the national organization over to Flip Benham in Dallas, Texas, in 1994. Pat continued for over 20 years to work as an administrator for Operation Rescue / Operation Save America at national and regional pro-life events. Her work was as a “ministry of helps” to several “type-A” personalities. I helped her organize several events in central Florida, and I was amazed at her tirelessness and patience.

Keith Tucci also founded Life Coalition International (LCI), which was meant to be the missionary outreach for Operation Rescue to assist pro-life ministries of all types overseas. In 1995, I was pleased to help LCI organize the first national pro-life conference in the history of Russia, attended by hundreds of pastors from all over the former Soviet Union. Pat McEwen eventually took over as the director of LCI. She was sent out from our church to pioneer pro-life and other missionary works in New Zealand, Australia, China, India, Europe, Israel, Central America, South America, and Africa.

In the 1990s, she was involved in helping refugee Christians from China find residency and jobs in several countries in South America. These were people fleeing China’s one-child policy, where women and men are sterilized against their will by the communist government. Although Representative Chris Smith took up their cause, the Clinton administration refused to work with LCI and other groups in allowing them to immigrate to America. So Miss Pat worked tirelessly to find them refuge elsewhere.

When Personhood USA, led by Cal Zastrow, Keith Mason, and later, Dan Becker, began a Florida affiliate, they insisted that the organization have Pat McEwen as an executive board member and a co-sponsor of the state constitutional amendment petition. Pat later served as a delegate for Personhood Florida to the Personhood Alliance, the national organization for all personhood state affiliates, as well as on the boards of other national and international pro-life groups. In addition to all of this, she also served as a volunteer church administrator in Christian Life Family Church in Melbourne.

Of all the ministries Pat was involved in, her greatest love was for the mission field. Even during her cancer treatments, she made several mission trips a year and traveled to pro-life conferences all over the world. Her message was for the personhood of all human beings, with no exceptions and no compromise, based on absolute truth, as she explains in this clip from the docuseries The Abortion Matrix.

At a conference in 2001, Pat said in an address to fellow Christian missionaries:

“Jesus chose the ordinary working people. Peter was fishing. Matthew was collecting taxes, not a popular profession in any time. What made them special? They were special because they were ordinary.”

Pat may have seemed ordinary at first glance, but she influenced many pro-life leaders and organizations around the world in the paradigm shift toward the no compromise, no exceptions stance of personhood. She even had the opportunity to meet and speak with government leaders in various countries.

As the coordinator for LCI in Africa, she also traveled with Doctors for Life International, a missionary group that worked in the African bush with tribesmen that were in dire need of medical care. She traveled through war-torn areas where the roads were being actively shelled by artillery. She even contracted a number of diseases that can lead to blindness or even death. We in the West have eradicated these maladies through modern medicine, but these are rampant in the remote areas of Africa. She helped treat lepers and AIDS victims, but her group specialized in performing eye surgeries in areas that were difficult to reach, as shown in this video of Doctors for Life International’s Aid 2 Africa program.

After going to Africa several times a year since 2009, she was thankful she could still go on some Aid 2 Africa outreaches, even though she was suffering with cancer. She would time her chemotherapy to be able to make these trips. Pat compiled numerous stories of tribal people who would dance or burst into laughter when they discovered that their vision had been restored after surgery. She even witnessed miraculous healings on the mission field due to prayer.

“These areas are pretty remote and people cannot just go to an optometrist in a city to get testing and glasses. I spotted a lady who was an albino, in the queue. I asked Benerio to bring her in for a pair of sunglasses because the African sun often blinds the albino. After giving her the glasses, I examined her and found that she already had severe vision loss. She could only count fingers at about four feet, even with a -10 lens, the strongest we can test for. I could not help her and was feeling so sorry that we had nothing to help her severe problem. She was almost blind. Prayerfully, I looked through our glasses just in case. By God’s grace, I found a -15 pair that also were very dark sunglass. When I took away the original sunglasses, her face fell, but when I placed the new pair on her face, she burst into laughter because she could see.

Our motto is “so the blind might see,” and it means both physical and spiritual sight. She, like most of our patients, listened intently to the Gospel message and left with a tract in her native language clutched tightly to her chest. There is no joy like seeing someone’s eyes open to the Gospel.”

There are many more stories from the mission field that Pat compiled over the years. But one story that stands out is her work in training Christians in the Zulu territory along South Africa’s east coast to do sidewalk counseling. After several days of training, they decided to name the ministry, “11th Hour Counselors” since there are no sidewalks in front to the abortion clinics in Africa. On the day that the group was to put their training into action, they loaded up a school bus to go off to an abortion center in Zululand. People were crowded onto the bus three to a seat for the long, hot journey through the Zulu territory so there was no more room. Some cried when they had to be left behind.

Jesus told His disciples not just to preach the Gospel to make converts, but to “make disciples of all nations” teaching them to obey all of the counsel of the Word of God. The nations scripturally are the ethne, or “peoples groups” of the world. The nations are not geopolitical countries, but rather every ethnic group with its own language, culture, beliefs, customs, and mores. Although the Zulus are part of South Africa today, they are a “nation” or “peoples group.”

How many people can say that they were responsible for closing every abortion center in an entire nation? How many can say they even know someone who accomplished that?

Although I am grieved and will miss my friend, I am happy when I think of the crown she is wearing as a glorified member of the Church Triumphant in heaven.

This memoriam was republished with permission and originally appeared on the Forerunner Blog.